My career and the success of my business are based on the relationships I’ve built over time by supporting the talent needs of the Corrugated Industry. Over the span of my career, I have been so fortunate to meet and work with people that have become a huge part of my life. While these relationships are usually established over the phone, I have always welcomed the opportunity to connect in person.

Last month, I was fortunate enough to travel to Orlando and participate in TAPPI and AICC’s SuperCorr Convention. While I make it a point to attend CorrExpo every year, the SuperCorr draws even more people and vendors, which makes it an even more valuable trip for me.

This event is a wonderful opportunity for me to reconnect with so many people within the corrugated industry that I would not otherwise have a chance to meet. The Orlando exhibit hall was packed with technology, people, swag, and cocktails, and then there’s the Fosber party that I always look forward to. What’s not to like?

After meeting so many friends, old and new, and speaking with converters, vendors and OEM’s, I left with sore feet and a renewed affection for my career and the market I work with every day. I look forward to seeing everyone at CorrExpo next year in Providence, RI.

In the meantime, I wanted to give my teammate, Teresa Hundt, a chance to share thoughts from her first SuperCorr Experience. What follows is her observation from the week in Orlando: 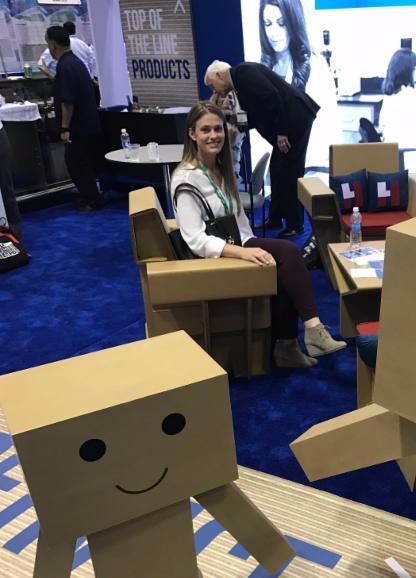 forever, and I’ve traveled and met with my fair share of industry contacts over that time, but a few weeks ago in Orlando, I had an entirely new, awesome experience – I went to my first SuperCorr!

I’ve always said that this industry is like that game “Six Degrees of Kevin Bacon” but a whole lot less than six, and this conference proved just how correct that was. Everyone was connected!

I did make one other pretty large observation as I ventured through the conference floor with Roy, though, and it just solidified thoughts I’ve formed by speaking with so many people in the industry and visiting plants – the Corrugated Industry is OLD. And I don’t mean old from an industry standpoint, I mean from a people standpoint!

To call upon one of Roy’s favorite sayings, or Roy-isms as we call them around the O&A office, this is an observation, not a judgement. The reality is that the industry is aging, especially at the top, and there doesn’t seem to be a ton of young, new blood being introduced at a rate that would replace it when those leaders retire. From the people I talk to every day, and my observations from those discussions, there’s going to be a massive wave of retirement in the next 10-15 years, without enough discussion on succession planning. This is going to be a pretty significant problem.

Here’s where we get to the judgement – maybe it’s a generational problem.

The generation that’s running plants now grew up with the mindset that they needed to get a job and support their families when they left school. But, there are more options out there now, so most of the next generation doesn’t want to spend 8-12 hours a day, 6-7 days a week in a hot box plant. Millennials have grown up with computers, and “matured” with iPhones and that constant flow of information – getting their hands dirty on the floor of a plant doesn’t appeal to most of them.

And this isn’t just a problem because of the need to fill roles when people retire – it’s also a problem of stagnation. Young people bring new, fresh ideas and innovation to the industry to continue to push the industry forward, as well. Where is that push towards innovation going to come from without an influx of youth?

Whatever the issue is, this would seem to be a pretty significant hurdle for the

Corrugated Industry moving forward. Do y’all see this as an issue at your current plant and company? What potential solutions exist?